The nuclear power of the 2020s is not your grandparents’ kind of nuclear power. However, it typically still requires water supply, water treatment, and wastewater management.

Despite its imperfect reputation, nuclear power is one of the most promising and reliable power generation technologies in the energy transition toolbox. But it’s not new by any means. Large-scale plants have been providing low-carbon intensity power in many countries across the world since the late 1950s.

Recent advancements are revitalizing the prospects for this mid-century technology. One of the more interesting developments comes in the form of Small Modular Reactors, or SMRs, which can produce up to 300 megawatts (MWe) of electric power per module.

Wherever they are used, and however large or small, nuclear reactors use water.

In the United States, the amount of water used in thermoelectric power generation is a significant portion of total water use at around 41 percent. Within this water use fraction, the portion used by nuclear power plants is around one-fifth, similar to nuclear energy’s contribution to total electrical output.

US freshwater withdrawals, 322B gal/day 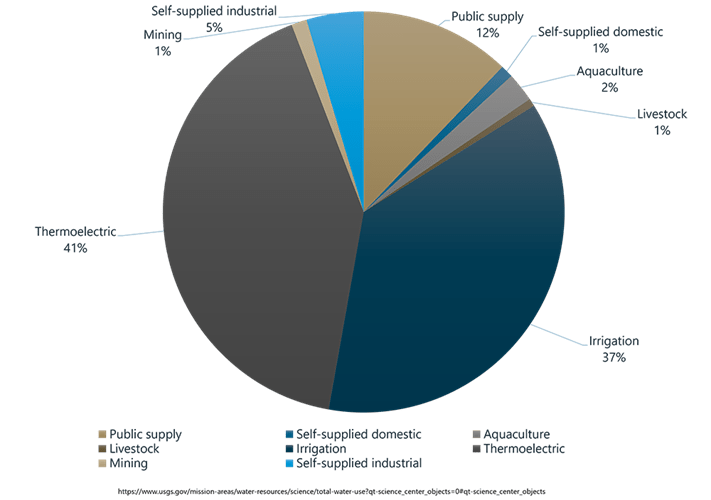 Water supply, treatment, and management are important considerations regardless of why nuclear power is in prospect.

The shift to smaller reactors opens up the potential to use nuclear power instead of petroleum-based energy in many new applications. SMRs could replace fossil fuels for both on-and-off-grid electricity generation in both urban and more remote areas. Our clients are looking at using SMRs for clean hydrogen production, desalination, district heating, chemical processing, and so much more.

Further afield, their capability, flexibility, and inherent safety features mean that SMRs will likely power the first human settlements on the Moon and even Mars. 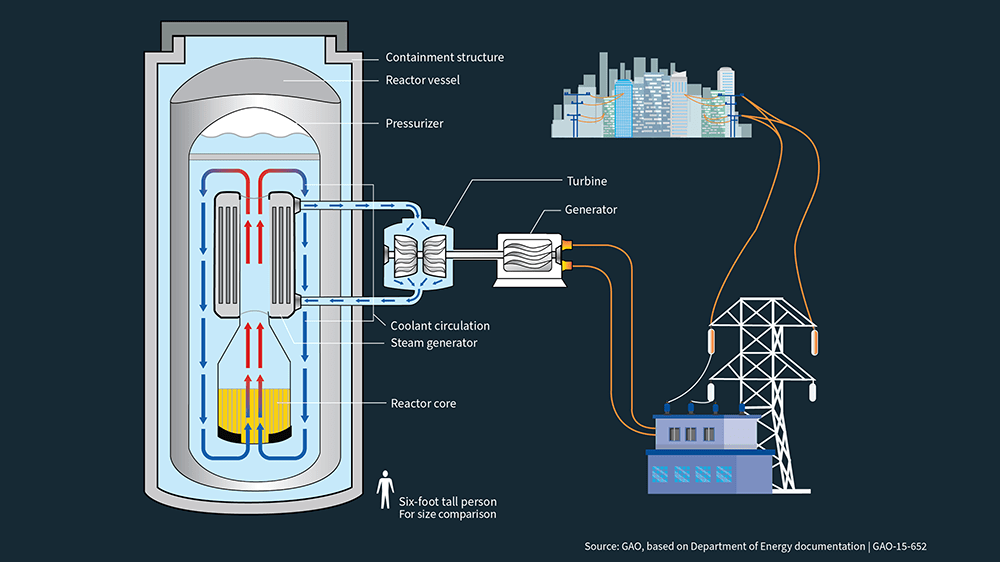 Currently there are scores of different SMR concepts being studied and in different stages of development/licensing. Categorized here by type of cooling material:

Regardless of what the internal heat transfer material is ultimately when the heat gets rejected – water is required.

Replacing fossil fuel-fired boilers in steam power plants is one attractive use for SMRs. This retains the existing steam turbine equipment and other systems while eliminating emissions to generate steam.

Roughly 1,650 lb/MWh of greenhouse gas emissions in a black coal plant is reduced to nearly zero with SMR repowering. NOx, SOx, particles, and other emissions are also eliminated. This reduces water demand notably for combustion gas scrubbers. But the water demand for cooling remains. And there may be some minor new demands.

Water has always been an essential feature of nuclear power generation.

Regardless of how big or how small a nuclear power plant is, water is critical. Water use for SMRs will vary depending on the type of SMR used and the application. 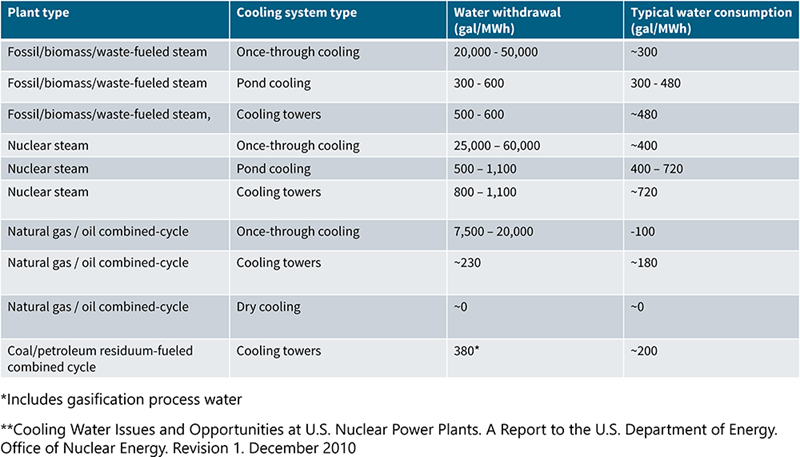 Water use for any type of nuclear power plant, including SMRs, resembles that of other fuel combustion-based power plants which include a steam cycle. Power plants like these are known as Rankine cycle or thermoelectric plants. The Rankine cycle is the most widely used thermodynamic cycle in nuclear and coal-fired power plants.

In 2021, Rankine cycle systems provided roughly 70 percent of the electricity in the US economy.

Although there are many options that could be used as the working fluid in the Rankine cycle, water is typically the fluid of choice due to its abundance, low-cost, chemical makeup and other favorable properties. It’s important to note that although some of the water circulating in a Rankine cycle system can be retained, much of the cooling water makeup is lost in the process.

Water-cooled reactors and SMRs have an additional water requirement for spent fuel cooling and maintenance. Additional treatment may be required for water that comes into contact with the fuel or spent fuel.

Some SMRs can be air-cooled, or rely on other cooling processes (such as district heating) resulting in reduced water requirements.

The ultrapure water required for nuclear boiler feedwater has traditionally been produced using similar methods to those used in coal-burning power plants. This water treatment process has been primarily based on chemical intense ion exchange demineralization processes. New demineralization technology using membrane separation is now available. These new systems use less chemicals and are becoming widely used across the industry.

The decision makers at modern power plants are often selecting zero liquid discharge (ZLD) wastewater systems rather than discharging concentrated saline wastes to local waterways. This is usually a more environmentally sustainable option but adds complexity to the water treatment systems. ZLD requires specialized equipment to process and recycle all of the wastewater from a power plant. However, in some cases it can provide valuable by-products from what was previously waste.

We design and operate ZLD facilities at major power plants.

The ZLD facility at a large thermoelectric power plant where Worley operates all ancillaries, including the sophisticated ZLD system.

How can we help you?

Understanding water-related risks and opportunities allows you to implement better project approaches. Stay tuned as we take a deeper dive into water usage considerations across the energy transition.

Subscribe to receive the next article in this series

Water in the energy transition series

The critical importance of water in the energy transition

Why water is critical to the energy transition

The importance of water to the hydrogen industry

Pumped storage hydropower is critical for the energy transition

The importance of water for renewable diesel production

The essential role of water for renewable natural gas

Why water will determine the future of battery production