Three things we've learned about the future of electrification in Canada

Replacing fossil fuel energy sources with electricity can reduce emissions by as much as 90 percent – and help industrial facilities stay competitive. But electrification is more complex than simply flicking the switch. Roy Hunt, Sustainability Advisor of Advisian, looks at what this means for Canada.

Our full report is available here.

Canada’s intensive industries currently source less than 30 percent of their energy from electricity. Yet Canada has huge renewable energy potential. To reduce emissions and remain competitive, electrification must be part of Canada’s plan.

But intensive industries are difficult to decarbonize and shifting to renewable electrical power is a huge investment.

In fact, the median capital cost of electrifying Canada’s intensive industries is US$300 billion.

We’ve looked at Canada’s electrification opportunities at the sector and facility level to highlight what we need to move forward.

And we’ve tracked paths through all of Canada’s most intensive industries. Our full report is available here. Below are the main takeaways.

1. The biggest opportunities are in oil
and gas

Industries and facilities are unique. And their greenhouse gas (GHG) reduction potential looks different depending on the type of facility, sector and geography. The oil and gas sector emits the largest amount of GHG (44 percent), with emissions coming from many different types of facilities that cover everything from extraction to consumption. And all oil and gas facilities are energy intensive.

2. Electrification with renewables significantly reduces emissions footprints—by as much as 90 percent

Take, for example, a steel mill using an emerging method to electrify the steelmaking process1. Steel plants like these require large amounts of coal and natural gas, and integrating electrical power requires complex changes. These include changes to the process facilities using a disruptive technology, such as a hydrogen-based direct reduction process, and replacing coal/coke with green hydrogen2.

The result? An overall GHG reduction of 95 percent, as shown below. 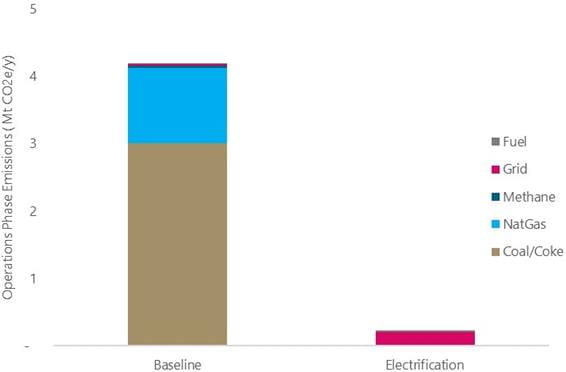 But reducing emissions creates changes in capital and operating costs. And while emissions decreased, energy costs shifted from coal and natural gas to electricity.

Still, despite the increase in costs there are other benefits from electrification. For example, placing a steel mill closer to an iron ore mine and hydropower sources reduces transport distances and the associated costs.

Across Canada’s intensive industries, the pattern is similar. Electrification, when using a low GHG grid, results in an emissions reduction of over 90 percent.

On a per-facility basis, the potential for electrification to reduce emissions is greater for gas pipelines, in-situ heavy oil, and liquid natural gas (LNG) as shown. 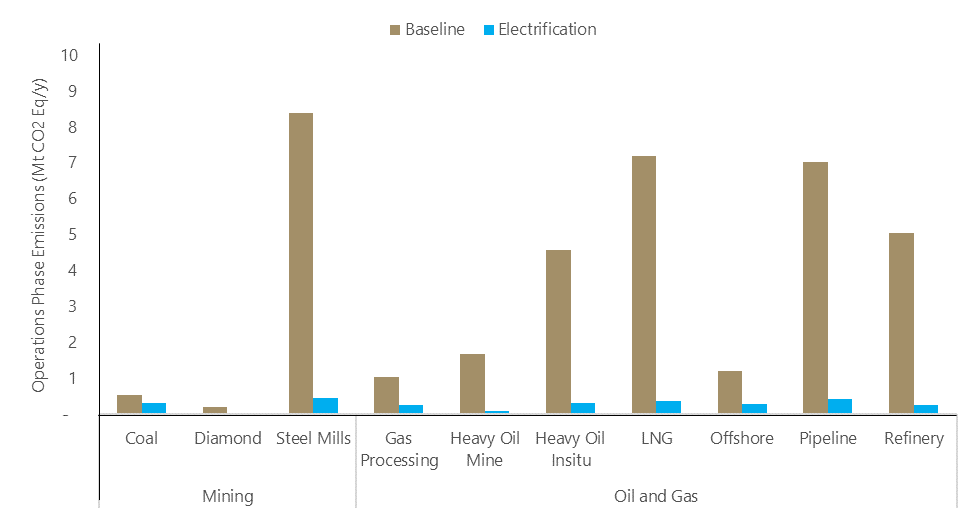 Some challenges can reduce the potential of electrification.

The remote nature of offshore oil and gas platforms increases capital and operating costs – emissions from flaring require other solutions. Still, oil platforms and natural gas processing can reduce GHG by 75 percent through electrification. Coal mining has the lowest GHG reduction performance because of methane emissions and residual diesel fuel used in specialized equipment. Other methods can reduce these types of emissions.

3. Cost effectiveness will prove itself
over time

Electrification will only be viable if it’s cost effective. To understand this, we developed a cost curve for comparing GHG reduction across intensive sectors. It maps the cost difference for replacing facilities with electrified alternatives, such as electric boilers or heaters, compared to replacing them with conventional technologies that use diesel or natural gas. 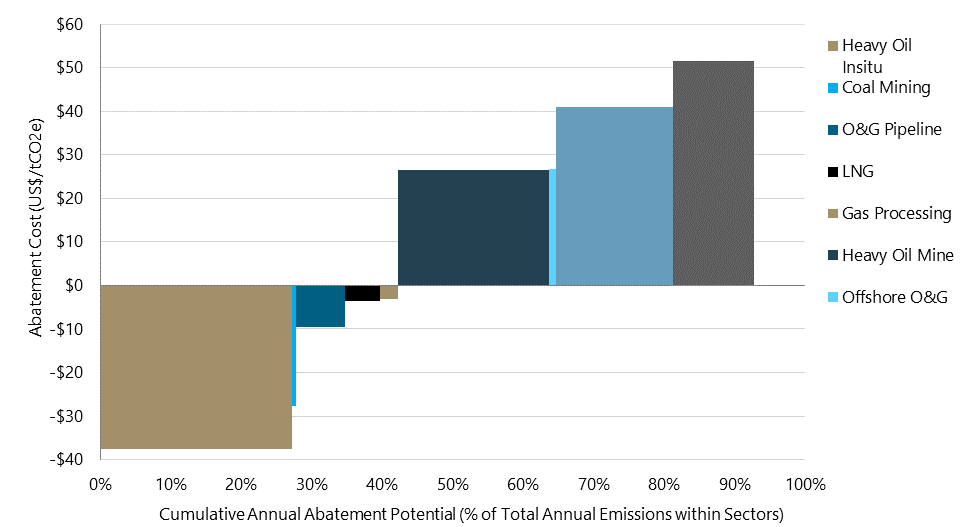 The biggest opportunities to save money and reduce large-scale GHG are with in-situ heavy oil, gas pipelines, and LNG. The rest of the industries will need to spend reasonable amounts to see the same benefits. The costs of electrification technologies will go down as more people adopt them, but late comers will lose market share.

So how can the industry prepare for electrification?

In the short-term, operators can determine the cost-benefit of switching to electrification by looking at how it compares to other low-carbon options, such as carbon capture, utilization and storage. Operators can also look at how much electrification will cost and when to implement.

Understanding how much value you can realize from producing an ultra-low carbon intensity product is also an important next step, so operators can attract investments, market premium and customers.

1. (Gielen et al, 2020) While the method has been accelerated in Europe, it hasn’t been critically assessed as a possibility in Canada.