Southeast Asia is experiencing considerable economic growth, with an increasing need for reliable, secure and sustainable energy. Between 2000 and 2013, energy demand of the 10 countries that make up the Association of Southeast Asian Nations (ASEAN) increased by 50%.

The International Energy Agency predicts that Southeast Asia’s energy demand will continue to grow a further 80%, with gas demand rising by approximately 65% by 2040.

The forecast also shows an increase in coal demand; however, with the recent Paris Agreement the big question is whether the growing pressure on Southeast Asia to reduce emissions will swing the balance in favour of gas and renewables. Either way, new sources of cost-effective energy for the region will be needed, with added pressure to keep greenhouse gas emissions down.

The role of major trans-country pipelines is being threatened as Liquefied Natural Gas (LNG) operations provide fuel to a greater number of markets. Despite their relatively expensive construction and operation costs, the attractiveness of LNG shipments lies in access to distant markets which are uneconomical for pipeline transport.

On the other hand, pipelines are generally considered more reliable than LNG tankers partly due to the rise in piracy. Energy usage and greenhouse gas emissions are also significant areas where pipeline gas can have an advantage over LNG.

According to a recent study commissioned by the European Union - the typical energy ‘penalty’ for gas delivery via pipelines is only 10-15% (efficiency of 85-90%), whereas for LNG it is approximately 25% (efficiency of about 75%).

Currently, in excess of 20 world-scale LNG import terminal projects are being developed. Even in traditional markets, increasing LNG is seen as an approach to offset high demand constraints in existing networks and provide an alternative supply source to local gas fields. From traditional land-based regasification terminals, floating storage solutions are being developed as lower cost and faster schedule options.

The degree of use of new pipeline networks for these terminals will heavily depend on the relative cost of distributed supply versus building smaller and local LNG regasification facilities.

Understanding the attractiveness of larger supply hubs and gas distribution requires some review of the relative cost and funding models for the various approaches.

Southeast Asia is still a net exporter of LNG but it has the classic problem that the location of the gas supply fields are far away from the major demand centres. This is further exacerbated because Southeast Asia is made up of islands requiring subsea pipelines to connect them. In Southeast Asia the cost of floating storage and regasification units is reducing and they offer a distinct advantage in that they are not tied to one source of supply which is often the case for a pipeline.

To attempt to create a realistic comparison between supplying Southeast Asia with pipeline gas versus LNG, we have generated the typical costs associated with supply gas through LNG shipping then calculated the length of both onshore and subsea pipeline that would equate to similar supply chain costs to the LNG supply chain.

The results indicated that if the onshore distance between the gas supply location and the gas demand location is less than 1700km, a pipeline is less expensive over the course of a 10 year period than utilising LNG export, shipping and regasification. If - as is often the case in Southeast Asia - a subsea pipeline is required between the supply and demand locations, the cut-off distance is closer to 1000km under which the pipeline option is more attractive.

As noted previously, the LNG option allows for greater diversification of supply than the pipeline option - which is a significant consideration for Southeast Asia where some existing gas supplies are depleting. On the other hand, the pipeline option maintains a better environmental footprint without the energy requirement for liquefaction. 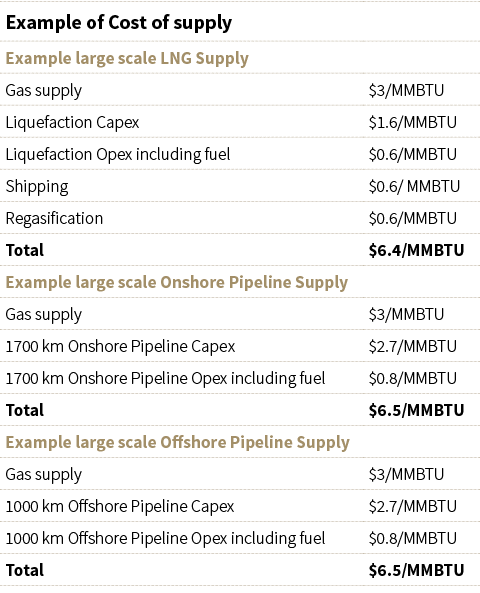 The LNG alternatives to pipelines can fit into two categories, large and small. Large scale LNG is well understood with both land-based and floating system terminals solutions. Typically the larger facilities benefit from scale and require at least a local pipeline network for distribution.

With Southeast Asia spread over a large area - with many islands and smaller communities requiring energy solutions - small-scale LNG is an emerging industry. It is an economically attractive method for distributing gas into smaller communities and provides a real opportunity for growing their gas market, and reducing their energy cost. Currently small and micro scale LNG approaches are being assessed. The concept replaces the requirement for pipelines from regional hubs and delivers LNG to users either by road or via shipment in smaller vessels. Small storage and regasification facilities would be provided in a location, with a primary focus on power generation. The penetration of small-scale LNG versus extending pipeline networks from hubs is likely to be heavily dependent on the ability of countries to set up distribution networks and the financing mechanism to enable local communities to build the required LNG infrastructure.

More pipelines will be required

It is important to recognise that despite who wins the battle between major gas export pipelines and LNG export/import, further development of pipelines will be required for Southeast Asia in both cases. The location of a land-based LNG import regasification terminal requires appropriate water depth and conditions, and usually requires onshore pipelines to transport the gas into the gas pipeline network and to the demand centres. The location of a floating storage and regasification terminal also requires the right conditions, an offshore pipeline to bring the gas to land, and a similar onshore pipeline to connect to the gas pipeline to the network or industrial gas customers.Either way, more gas pipelines will be required.

With Southeast Asia’s energy demand set to increase approximately 80% by 2040, gas will play a major role in meeting this demand.

Southeast Asia’s gas imports are likely to overtake their exports by as early as 2020. To meet this demand, around 20 to 30 small scale and large scale floating and land-based LNG import regasification terminals are likely to be constructed, all requiring new pipelines to be designed and constructed.

How ready is your project for delivering production?