When a global gas major wanted to de-risk their future operations against carbon pricing, we found a less obvious solution that could save millions.

Emerging regulatory scrutiny on greenhouse gas (GHG) emissions across a number of current and potential future operating countries was a growing concern for a global gas major, particularly the potential business impact of GHG emissions pricing on their global LNG operations.

The operator wanted to understand the most effective solution, technically and economically, for implementing carbon capture technology on their global LNG portfolio, with a view to adopt the recommended option.

The study required a combination of technical and strategic expertise: 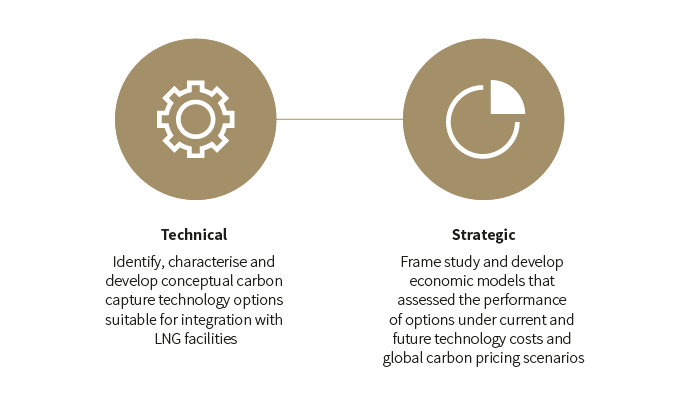 Over 20 subject-matter experts participated in the workshop, representing a broad cross-section of the client’s business including:

They were complemented by Advisian subject-matter experts from Australia, United Kingdom and the USA in LNG, carbon capture and storage (CCS) technologies and GHG emissions pricing.

The true objective of the study was not strictly to identify the best carbon capture technology option, but rather to identify the most economic and sustainable option to de-risk future LNG developments from potential future carbon pricing

Through the structured framing process, it emerged – with workshop participants collectively agreeing – that the true objective of the study was not strictly to identify the best carbon capture technology option, but rather to identify the most economic and sustainable option to de-risk future LNG developments from potential future carbon pricing. This included options to reduce the GHG emissions footprint of an LNG facility with no CCS technology, and potentially configuring an LNG facility such that CCS technology could be installed at some point in the future.

The non-CCS options focused on the use of best-in-class technology, waste heat recovery and electric motors to reduce the emissions footprint of the facility, or the purchase of power from a de-carbonised grid (e.g. renewables.)

In parallel, our decision and risk analysis team worked with our technical CCS subject-matter experts and GHG emissions pricing experts to develop a representative decision model utilising our proprietary economic modelling tool DELT∆TM. This enabled the assessment of identified options under different current and future price scenarios for the cost of CCS and non-CCS technologies, gas/LNG prices, energy prices and GHG emissions.

In addition, a separate analysis was performed to assess the implications of CCS options being configured so no CCS technology is in place at the start of operations, but could be added at some point in the future with the implementation date being a key variable. A bespoke economic model was created to determine the ‘option value’ of an LNG facility being ‘carbon capture ready’, under different installation dates and current and future price scenarios, for the cost of CCS technology and GHG emissions.

Our analysis revealed that under the majority of current conditions - the cost of CCS and non-CCS technologies, gas/LNG prices, energy prices and GHG emissions prices - the CCS options were all uneconomic (i.e. the carbon footprint of an LNG facility meant that the mitigation benefits from adopting CCS technology were less than the costs of implementation).

Interestingly, one of the non-CCS options – best-in-class electric motor technologies in combination with local combined cycle gas turbine (CCGT) power generators utilising waste heat recovery – was an economic proposition under the majority of current conditions considered. It also represented a cost savings of USD260M, compared to the business as usual LNG facility design under base case conditions (above and beyond the GHG emissions reduction benefit).

As potential carbon prices were increased in our model, the CCS options became economic (starting when prices exceeded USD25/t). However, even when relatively high carbon prices were assumed, the best-in-class electric motors and local CCGT power generation was the best option under >80% of all current and future conditions assessed.

In addition, the analysis revealed that retrofitting facilities with CCS technology was an ineffective and costly approach, and if there was concern with a potential regulator-driven need for implementing CCS on facilities in the future, pre-investment (of approximately USD50M) to make an LNG facility carbon-capture ready was the optimum economic approach.

The client used the analysis during their engagement with the relevant regulatory agencies on their next major LNG development, where the case for not pursuing carbon capture storage technology was presented.

The regulator accepted their proposed path forward. This was a departure from a recent precedent set elsewhere in the country, where an operator agreed with the regulator to pursue carbon capture technology in their LNG development. In the absence of a stable carbon price in that country, this has proved to be an expensive exercise, far exceeding the current regulation-driven or market-driven prices on carbon anywhere in the world.

The analysis also led to first time development of the recommended technology option on the client’s next major LNG development.